Do you enjoy fragments? I do. A glimpse of a strangers face, a remembered line of an old song, a whispered conversation on a bus, a delicious aroma teasing from someone else’s house, the middle of a movie you haven’t got time to watch till the end, a dream that vanishes on waking, a phrase you just have to copy down…

They arouse my curiosity and imagination more than any completed experience.

Australian writer Elizabeth Jolley, wrote fragments  on scraps of paper for years before she was first published in her fifties. She was too busy raising a family and working at an assortment of jobs to have enough time to write at length and at leisure. I was one of her many correspondents whom she  encouraged to write short notes about the weather, landscape, overheard conversations, because I too had a full life with little time. She was quoted in 1986 as saying: “If anybody had asked to see a work in progress it would have been lots of bits of paper with scribbles on.”

A fragment is defined as “an isolated or incomplete part”. But, although incomplete, it is at the same time complete in itself because it contains the potential of what it may become…a story, poem, song, healing memory, nourishing meal, something understood, a puzzle solved.

Fragments allow mystery into our lives and curiosity leads us on….

My thought today is simply, that we can be surprised by beauty in unexpected places and what a delight that is!

I saw this drawing in a community hall in Yirrkala a few months ago and was drawn to the expressive movements of the women in dance and how well the art work was executed. When I asked if anyone knew the artist I was told it was a local worker, not someone who made their living from art. It’s not there now, maybe the artist wanted it back, or maybe a lucky person purchased it The day I saw it was a working day for me, driving around in the heat of midday  looking for patients in the community, the passionate dancing image twirled my mind into a place of joy for just a few moments.

Surprises like this give me reasons to smile and remember that days, especially working days, aren’t only filled with serious effort, there’s lightness as well if we’re open to it. 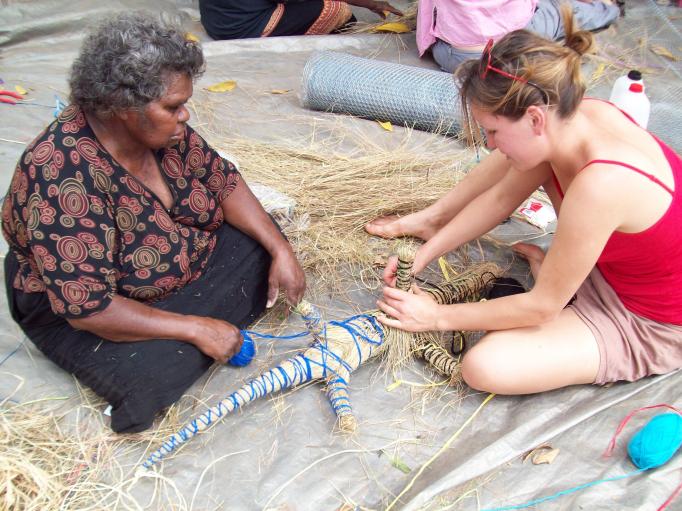 I can’t drag myself away from the topic of creativity it seems to me to hold much that is hopeful and playful and worthwhile. I’ll share another quote from Eric Maisel’s “The Creativity Book” in which he invites the reader to think about creativity in a broader life sense than merely a narrow “artistic” view.

“Creativity is linked in our minds with poets, artists, inventors, and people of that sort. We think of the Edisons, Einsteins, Picassos and Beethovens of the world as creative. But any job can be done more creatively and life can be lived more creatively. What’s required are certain changes: that you begin to think of yourself as creative, that you use your imagination and your mind more, that you become freer but also more disciplined, that you approach the world with greater passion and curiosity.”

Even the dullest job, the most tedious task and the most unpromising day can hold possibilities if we approach them with curiosity and imagination. I found nursing like that…curiosity as to what was coming next, what my patients would be like, what could they teach me, what stories could I hear? and so on. Curiosity keeps us alive and growing.

Pictured here is an Indigenous weaver from the central Desert visiting Aurukun Art Centre to share her techniques with her Queensland sisters.

Among the most important things in living a creative life is having a passionate desire for what you love and following it without giving up. Here’s a poem by Hafiz, a 14th century Persian Sufi master that puts this succinctly.

The
Difference
Between a good artist
And a great one
Is:
The novice
Will often lay down his tool
Or brush
Then pick an invisible club
On the minds table
And helplessly smash the easels and
Jade.
Whereas the vintage man
No longer hurts himself or anyone
And keeps on
Sculpting
Light.

When I first arrived in Aurukun I had a cheap “point and shoot” digital camera. I’d enjoyed taking photos for years but never had the confidence to buy and learn to use an SLR. The first weekend I was there I wandered off around the community taking the usual shots of the clinic, shop, post office and air strip. When I walked towards the church to take my last image for the morning I saw a huge pig on the grass in the church yard. It look oddly out of place there and so, of course, made an interesting picture. I didn’t need an expensive camera to grab that moment in time, just the eye to see it.

Now years later and the owner of an SLR and doing a course to learn how to use it I still think a photographer must have the eye to see and the intuitive feel for what makes an interesting composition. Good shots can still be captured on a cheapie camera, price isn’t everything.

I worked in Aurukun at the top of Cape York, Queensland on a five week contract before deciding to apply for a permanent job in the clinic. After I was interviewed and got the job I was flown home to South-East Queensland for 10 days to pack my things to be shipped back for the three-bedroom house I was to move into.

En-route I stayed overnight in Cairns. There were too many people at the airport, the shops and the motel foyer. There seemed to be more cars on the roads than when I was there five weeks previously. The colours were brighter, there was too much choice in the shops and everyone seemed to be talking loudly. I felt strange just walking around Cairns Central looking at the shops. I felt out of place, like I didn’t belong.

When I arrived home and met up with family and friends their questions sounded trivial to me, or their lack of questions widened a gap I felt was opening up between me and everything I’d considered normal before I left home.

I didn’t know it then but I was feeling the effects of reverse culture shock.

When a person returns home after being in another country or social environment it takes a whole other set of adjustments to when they first encountered the new setting. People assume because their friend or family member who’s been away, looks and sounds like the person they knew, that they still  belong to all they left behind. But often things have changed in their absence and they have experienced life outside their previous norms in the time since they left home. They can, in fact, be quite disorientated on return.

Being aware of reverse culture shock, being prepared to experience boredom, isolation, disorientation and annoyance on arrival home will help a person to readjust. It’s a good idea to keep in contact with new friends made from the host culture and to talk to people with whom you can relate. It’s also often helpful to use creativity to incorporate the new cultural experiences into one’s regular life by writing articles or creating a photo exhibition, or simply by bringing art or cultural items into one’s home as a reminder of the time away.

Asking yourself what you’ve learnt and how you’ve changed help you to be more aware and to adjust and for the time away to have a positive effect.

I have to admit though that while these ideas are helpful, coping with reverse culture shock takes a much longer time than you’d think and if a person moves between cultures fairly regularly it doesn’t seem to get any easier. In fact one often feels like an in-between person not quite belonging anywhere.